It all started when I brainstormed a declarative game engine that'd be based on callbacks and contain similar features to Flash. I went straight into development. Out came FlevaR, my custom game engine.

The name idea came from "FlevaPack", a mini API for easily manipulating and auto resizing DOM elements. Since I decided to turn it into an entire library, I called it Flevapack Revolution(alized); or FlevaR.

Coincidentally, I found out that the next Ludum Dare Jam was approaching in one week, so the "meme" became whether or not I can create a game with the engine. The race to develop the main features before the Jam begins was on! Audio manager, textures, spritesheets, objects, built-in collision...all spaghetti coded throughout the week until at last, Ludum Dare 46 was upon us.

Geta Game Jam was also occuring throughout the same weekend; thus the meme was to create a game that'll possibly fit both jam themes. But..I needed a team.

I submitted a last minute post explaining my situation (trying a new "engine", only starting 24 hours into the jam, leaving me with 48 hours for the jam) and was able to get an artist and a music composer. Anxiety spiked, since I feared the worst! (getting great assets but making a terrible game) This was no longer a meme; this was serious.

Geta Game Jam's theme was "Something is Missing".

So we had to create a game that merged those two themes! 😃

The brainstorm session began. I went as far as using idea generators, reading blogs, and finally, bringing my high school friend onboard. I needed someone to work on gameplay and design, while I focus on programming, so that was his task. But throughout the project, it still felt like ultimately, I was the director, saying "yes" and "no" to assets, and requesting opinions on everything. Saying "I need this", or "Can you get me that" instead of being told "The game should do this."

One limitation was that most of the considerations were always "could your engine handle/support this". A small con though, since it was actually able to handle everything thrown at it (with a few tweaks here and there).

Another con was that, since I was occupied 24/7, there was no one to focus on posting "progress" screenshots to build hype of the game while in development.

Ideally, I wanted to work on the game while other members focused on setting up the submissions page and all that, but in the end I lacked the confidence to ask anyone to do things out of their talents, so I ended up doing it myself, last minute.

As a result, I ran out of time with the game, and had to rush adding menu screens and more during (and a bit past) submission hour.

The artist was able to whip out some amazing levels design. And after working on the mechanics for most of the jam, adding the graphics was a breeze.

The music composer's music was mindblowing! Easily able to adjust the music and increase intensity and chaos, or include soothing ease where required.

The designer came through with many riddles to implement, in sync with the assets provided. And, I was able to split some of the programming work (such as collision) to him, so I had more time to work on other things.

I've never actually known about the many different resources that goes into making something, and I appreciate every aspect of it now. 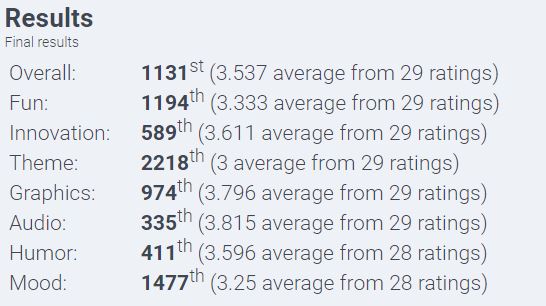 But expected, I tell you! 😅

I call them excuses since that's how I analyzed them to make myself feel better: 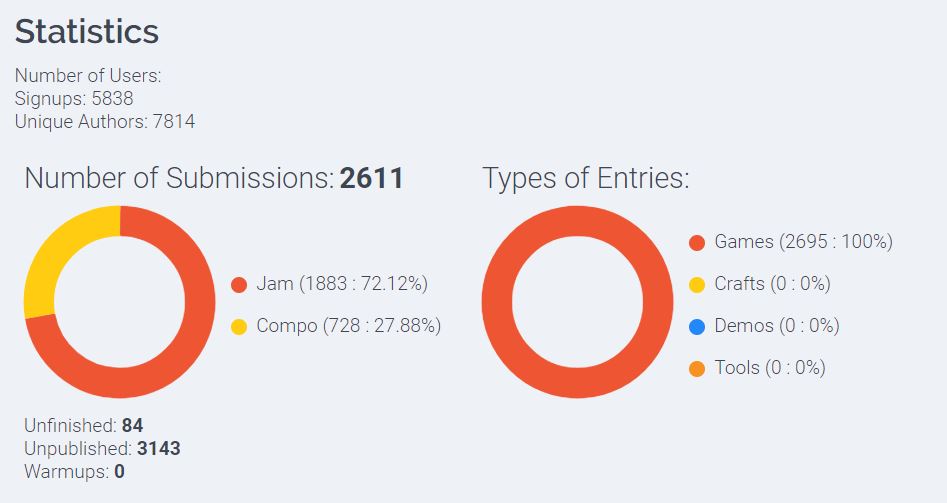 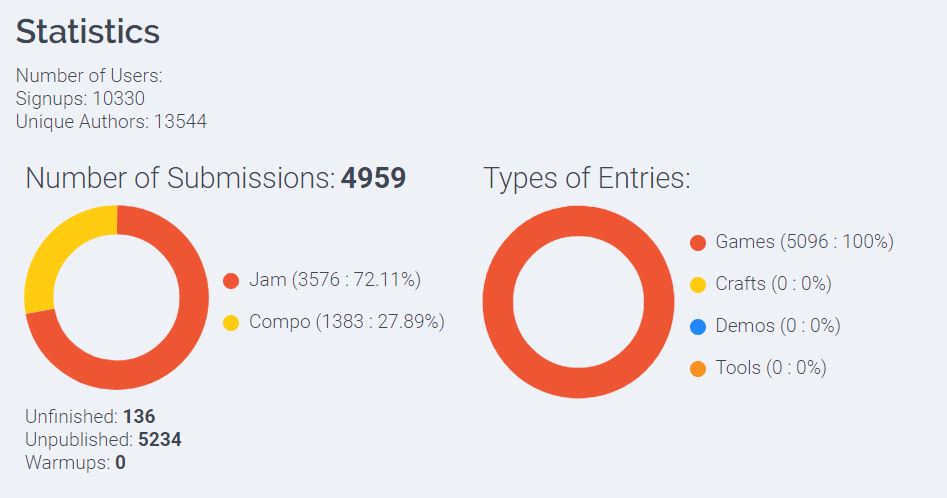 That means I had ALOT of competition. Maybe more elite teams joined in for the event. 😄

2) It's a result of a game I made in a meme engine. How far did I expect to get with it?

3) There were many limitations and inevitably, I ran out of time. There're many things I wanted to add to it (and still do) but it's better left as it is.

Compared with my previous game:

Similarly, looking at scores only, Miscen...Again!? beat Bob the Brawler in every category except Fun.

I don't blame it, a riddle game doesn't have much action, compared to a beat-em-up quick-paced-brawler.

My highest score was the audio! With 3.815 stars! I placed in the top 10% of games in that category!

The art was a close one too! BtB has a great artist as well, that explains why the ratings were so close!

To be honest, I was pretty bummed out about last Ludum Dare's results, where I played and played and rated lots of games, obtaining 100+ reviews on my game, which all seemed to be positive reviews. Yet, the ratings at the end didn't reflect all the positive feedback. I was betrayed by developers who wanted good ratings on their games! 🙃

As such, I concluded, I'll just play the minimum needed to get 20 reviews, then leave it there until results day to see if I do better this time. And even if I tried, I couldn't feel the excitement to play and rate games every single day; so I left it at that.

So, it is an illusional victory to compare Bob the Brawler's 114 ratings to Miscen...Again!?'s 29 ratings. Who knows, maybe the average stars would have lowered if I received 100+ more? Even though I tried to "cheat" the system, it didn't change the outcome much, which I conclude is a reflection of the game itself.

Well, it doesn't matter anyways. I'm not hung up on the results anyways since it was a mix between two jams. I was really excited participate in a team this Jam, and am really contented with what I was able to bring out of it. I figured I'd complete it before uploading it to other game portals (such as Newgrounds), but in conclusion, I'll leave it as it is, flaws and all.

During the 3 weeks of ratings and playing games, I've been working on expanding the FlevaR Engine. It's evolved into more than a meme. I was able to retrieve the files of my old flash games from my first wix website, and that further motivated me to complete the engine. I plan to further develop it and port some of my old Flash games to JavaScript, hopefully before 2020 ends. As well, I'll need to standardize the engine and complete the first official rollout of the wiki so other interested developers can get started with it.

I prefer to have someone onboard to do the world design and story building or giving meaning behind games. I understand that requires a lot of creativity and time. So in future projects, I'll also look for someone with that skill. As for game hype during development, I may also need to look for a marketer (someone solely responsible for the social media setups and advertising of the game during development and a while after release).

In my past collaborations, my role was basically "Give Danidre the assets, he'll handle everything else forever, bye."

Hopefully, I can maintain communication (if even a little bit) with team members and hopefully my role becomes more like "Create assets and give to 'the team' to incorporate it with other assets and designs and merge into one game"...unless of course the general idea is to spontaneously join, create, leave. 😂

Because it felt like I hired freelancers...for free, rather than briefly joined a team and built something. Hopefully I can find an area/create an environment in the future where responsibilities are more evenly distributed at least.

I see myself running through many game jams in the future. Most will be about testing my (currently developing) engine, as well as trying to see what fits with "team organizing". Planning itself is an important thing, so hopefully in the future I can get more of that checked, so more time is spent efficiently instead of rushing and worrying.

You can look out for another blog with more information on project's I've been working on in the past 3 months. As usual, you can join my Discord Server or follow me on Twitter if you want to keep updated with everything or talk development. Until next time, thanks for reading! 😃